About 6 months after my wife, Dawn, and I were married, she told me she wanted to go to the rescue and “look at the dogs.” I may be clueless, but even I was smart enough to understand that meant we were coming home with a dog. I was ok with this.

We went to several pet stores (the stores around us have dog rescues come in once a month for an adoption day). We met a lot of dogs. There wasn't a spark.

We decided to stop at one last place on the way home. There, sitting by the entrance, was Bandit. Dawn knelt down to pet his head. Seeing his opportunity, Bandit climbed up on her lap and put his head over her shoulder.

Sometimes we're lucky. Not only did we choose a companion; he chose us.

There was no discussion or debate. I was smart enough to understand that we were coming home with a dog. I was ok with this.

Bandit was a puppy when we found each other. His vet guessed he was maybe 6 months old. An astute reader might notice that means my wife and I will be celebrating our 14th wedding anniversary soon.

Bandit is our dog. We've both grown up with dogs, but those were the family dog, they were our parents’ dogs. Bandit is ours. There was pain, on some level, in losing those dogs. When Bandit dies, I know its going to be worse. More visceral. Real.

I don't know the day that we'll have to take him to the vet one last time. I do know that it's going to hurt when that day arrives.

Its heavy; being in charge of not just another living thing's well-being but also having the weight of deciding when its time to end that living thing. To say goodbye to a companion. It's not something I've put thought into until this last year. I've hoped that he'll die peacefully and painlessly in his sleep. I understand that fate might not indulge my selfishness.

I've had some tough talks with our vet lately. I periodically remind her that all of our choices absolutely have to be for Bandit's benefit and not mine.

Bandit is still, for his age, healthy. He doesn't run and play as much as he used to. Instead of an evening run, we go for an evening brisk walk.

We've adapted. Instead of running around the house with his toy, he prefers to play tug of war while lying down. When we do run around, he's quick to take a break and catch his breath. He's just happy to play. Getting old sucks. But you don't have to give into it. Adapt.

It's tough, with dogs, though. Their bodies age so fast. His liver and gall bladder are wearing out. His kidneys are marching on towards renal failure. While I wish he'd live another 4 years, and then another 10 after that, in my heart I'm pretty sure that life is going to suck next year.

I knew this phase of dog ownership was coming. I was smart enough to understand that we were coming home with a dog. I was ok with this.

And it's been worth it every day. 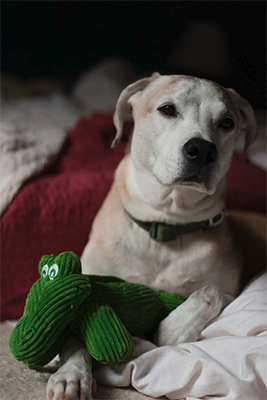